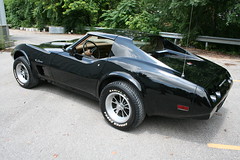 This 1973 Corvette Stingray 453 came in to the shop for a complete color change. The owner decided to change the  color because the original brown paint was beginning to show its age, there were numerous  paint checking and cracking issues that needed repairs. Having a car restored doesn’t always have to mean stripping a car down to bare meta or completely dissembling the entire car down to a shell, we help a number of collectors maintain their collections. Some cars are only in need of a freshening up like this one.

1973 started Corvette’s transformation from muscle to touring sports car. A Chevrolet advertisement headlined: “We gave it radials, a quieter ride, guard beams and a nose job.”Indeed, redesigned body mounts and radial tires did improve Corvette’s ride, and interior sound levels were reduced by 40%. The chrome rear bumper was essentially carried over from the previous year. However, the chrome blade front bumper was dropped for the federally required 5 mph (8.0 km/h) standard for a light-weight front bumper system with an inner transverse tube attached to the frame with two Omark-bolts-(special steel fasteners which absorbed energy when a forming die, pushed back by the bumper, was forced down their length), and an injection-molded urethane bumper cover. The urethane nose was chosen over Chevy’s other alternative, a more protruding version of the previous metal bumper. The new urethane bumper assembly added thirty-five pounds to the front end. Two 350 cu in (5.7 L) small block engines were available. The base L-48 engine produced 190 hp (142 kW). The L-82 was introduced as the optional high performance small-block engine (replacing the LT-1 engine) and delivered 250 hp (186 kW). The new hydraulic lifter motor featured a forged steel crankshaft, running in a four-bolt main block, with special rods, impact extruded pistons, a higher lift camshaft, mated to special heads with larger valves running at a higher 9:1 compression, and included finned aluminum valve covers to help dissipate heat. The L-82 was designed to come on strong at higher RPMand ordered with nearly 20% of the cars at a cost of $299.

Car and Driver on the L-82 in December 1972, “…when it comes to making a choice, the L82 is the engine we prefer. Duntov and the other Corvette engineers gravitate toward the big blocks because they like the torque. And granted, the 454s will squirt through traffic with just a feather touch on the gas pedal. But, to us at least, the small block engine contributes to a fine sense of balance in the Corvette that is rare in any GT car, so rare that it would be a shame to exchange it for a few lb.-ft. of torque.

The 454 cu in (7.4 L) LS-4 big-block V8 engine was offered delivering 275 hp (205 kW) and 15% of the cars were ordered so equipped. “454” emblems adorned the hood of big-block equipped Corvettes. All models featured a new cowl induction domed hood, which pulled air in through a rear hood intake into the engine compartment under full throttle, increasing power (but didn’t show up in the horsepower ratings). 0-60 times were reduced by a second while keeping the engine compartment cooler. The new tire size was GR70-15 with white stripes or raised white letters optional.An aluminum wheel option was seen on 1973 and 1974 pilot cars, and a few 1973s were so equipped, but withheld for quality issues, and wouldn’t be available until 1976.

Road & Track magazine stated in a 1973 road test: “For all its age, size and compromises, if the Corvette is equipped with the right options it is a pleasant and rewarding car to drive and this 1973 example was one the best Corvettes we’ve ever driven.” 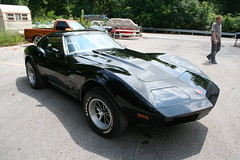 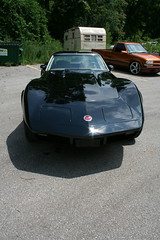