This 1950 Model 29 Hoover Vacuum hood was damaged when it was used as a prop in a local play.  He found us while searching the internet for someone that offers restoration services, he told us that it was nearly impossible to find anyone that was willing to attempt the repairs. We gladly took on the job, we have a lot of experience restoring not just classic cars but all sorts of vintage items. This hood was an interesting piece to work on, the plastic was very brittle & delicate. It took a lot of care to put this piece back together.

In 1950, Hoover introduced the Veriflex, which was the first rubberized suction hose in the industry.Other cleaners at the time were using cloth-braided hoses, which would deteriorate and lose suction over time.

In 1954 Herbert W. Hoover Jr. took over the presidency of the company from his father.A nephew of the founder, H. Earl Hoover, also served as chairman and honorary director.Debut ad for the Hoover Model 29, the first Hoover cleaner manufactured in red The sombre and restrained colors of the previous decades gave way to bright, striking modern color-schemes, starting with the Hoover Model 29 in 1950, which was red instead of the regular black and brown colors of the past. This was part of their policy of the continual development and modernization of their output. In 1957 Hoover introduced the Convertible Model 65 (the De Luxe 652 in the UK). It was the last machine designed by Henry Dreyfuss, the industrial designer who had worked with the company since the early 1930s.This cleaner introduced a feature Hoover termed ‘Automatic Shift’ – a system whereby the tool converter plugged into the rear of the cleaner. This wasn’t a new idea – instant tool conversion had been introduced in 1936 with the Model 150 Cleaning Ensemble. However, new to Model 65 – and slightly later in Britain on the 652A – was the introduction of a switch which automatically shifted the motor to a higher speed as the converter was inserted. The Convertible – or the Senior, in Britain – remains Hoover’s worldwide best-selling cleaner. Although the domestic line was finally discontinued in 1993, a version called the Guardsman is still available in the commercial sector. 1963 saw the introduction of the Dial-A-Matic in the US – sold in Australia as the Dynamatic, and in Britain, confusingly, as the Convertible. This was the first ever clean-air upright cleaner. The clean-air principle is similar to the flow of air through a cylinder/canister cleaner. Rather than the dirt passing directly through the suction fan and being blown into the bag, it passes through the bag first, leaving only clean air to pass through the fan. This principle was soon adopted by many manufacturers, and continues to be used today. Also, the machine was constructed out of hard plastic, Hoover produced this cleaner from 1963 until the late 1970s in America. In the summer of 1969 Hoover further refined the Dial-A-Matic’s design when they launched the ‘Powerdrive’ self-propulsion system on the Hoover model 1170. This idea took a lot of the effort out of pushing the cleaner, because, by using a system of gears, wheels, and belts, the cleaner used its own power to drive itself forward and backwards, the speed and direction was controlled entirely by the user though the ‘Triple-Action’ handgrip. The powerdrive feature on the model 1170 was so efficient, the user could push the bulky machine forward with one finger, and the feature could also be disengaged with a button on the handgrip so the machine could travel easily from room to room with the motor turned off, the machine was very difficult to push when the motor was turned off and the powerdrive was still activated. This was also the first vacuum cleaner available commercially that used the self-propulsion system. This extra technology made the Dial-A-Matic even heavier than the original, and at around $150, it was very expensive. The ‘Powerdrive’ system was carried over into the Concept range in 1978.The powerdrive system was later renamed “Self Propelled”. Hoover continued to use this feature on many products of the 1980s and 1990s. It is still being used today by Hoover and numerous other companies 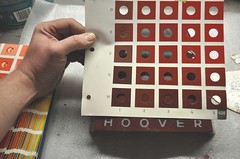 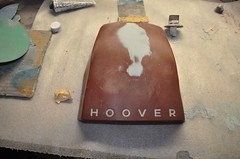 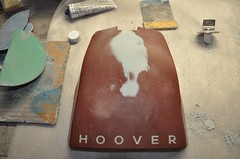 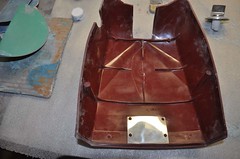 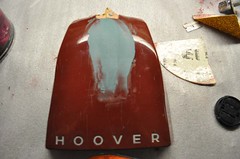 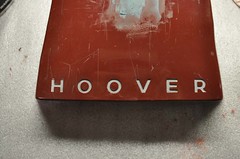 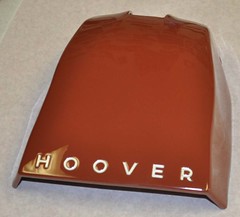 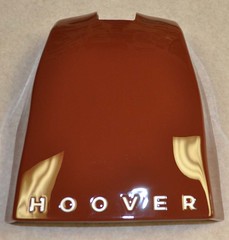 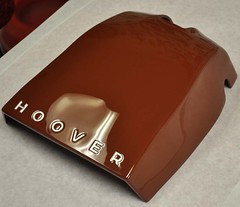