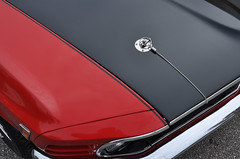 This 1970 Mustang Fastback came in for some owner designed custom flat black stripes on the hood, truck/roof, and rocker panels. A lot of times owners will come in with their own designs and ideas for what they want a car to look like & we are always willing and able to listen and make their ideas a reality.

The 1970 model year Mustangs were restyled to be less aggressive and therefore returned to single headlamps which were moved to the inside of the grille opening with ‘fins’ on the outside of the grille sides. Some felt the aggressive styling of the 1969 model hurt its sales and this view prompted the headlamp revisions and simplification of other exterior styling aspects. It’s worth noting though that 1969 sales exceeded those in 1970. The rear fender air scoops were removed and the taillight panel was now flat instead of concave as seen in 1969. The interior options remained mostly unchanged. 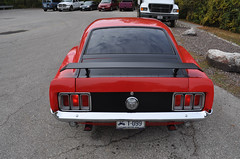