This 1970 Ford Mustang Mach 1 came in for a little freshening up. It needed some light body work & the paint on the hood & fenders was of poor quality, that needed to stripped off. Also the car was at some time painted the wrong color, we used an actual 1970 paint color chip book to match up with modern base clear color & get it just right. We also noticed that the Mustang embalms on the fenders were in the wrong place. We also installed new upholstery on the front seats. The car now looks great and will make a great addition to the owners collection.

The Ford Mustang Mach 1 is a performance-oriented option package of the Ford Mustang, originally introduced by Ford in August 1968 as a package for the 1969 model year. The Mach 1 title adorned performance oriented Mustang offerings until the original retirement of the moniker in 1978.

As part of a Ford heritage program, the Mach 1 package returned in 2003 as a high performance version of the SN95 platform. Visual connections to the 1969 model were integrated into the design to pay homage to the original. This generation of the Mach 1 was discontinued after the 2004 model year, with the introduction of the fifth-generation Mustang.

Ford first used the name “Mach 1” in its 1959 display of a concept “Levacar” called the Ford Rotunda. This concept vehicle used a cushion of air as propulsion on a circular dais. The Ford Mustang was successfully introduced in April 1964 as a sporty “Pony car” to attract younger buyers into Ford products. After a few years of development, Ford saw the need to create performance Mustangs to compete with GM and their release of the Chevrolet Camaro and Pontiac Firebird. As the performance war continued, the Mustang’s platform and engine bay were progressively redesigned to accommodate larger engine blocks. Late in the 1968 model year, Ford introduced the 428 cu in (7.0 L) Cobra Jet FE engine in a small group of Mustang GTs and into the 1968 Shelby GT500KR. This was a strong performer and indicated the direction of the 1969 Mustang. However, “GT” wasn’t a name that would initiate images of street screeching performance; hence the introduction of the Mach 1 title.

The Mach 1 package was only available in the ‘SportsRoof’ body style (previously known as the ‘Fastback‘); never on the hardtop or convertible. Many resto-mod visual conversions have since been performed by owners and enthusiasts, but are not Mach 1’s by VIN code.

Mach 1s came with upgraded suspension to varying degrees dependent upon powertrain choices. Big block cars had front shock tower reinforcement, thicker sway bars (no rear bar for 69), and heavier springs and shocks. 428 CJ/SCJ 4 speed cars also came with staggered rear shocks. Standard on Mach 1s was a fierce but cosmetic hood scoop that had integrated turn-signal lights mounted in the back. A more functional option was the signature “Shaker hood“, an air scoop mounted directly to the top of the motor, used to collect fresh air and so named for its tendency to “shake” above the rumbling V-8 below. The interior came complete with teak wood grain details, full sound deadening material and high-back sport bucket seats.

In 1969 endurance driver Mickey Thompson took three Mach 1 Mustangs to the Bonneville salt flats for a feature in Hot Rod magazine, in the process setting 295 speed and endurance records over a series of 500-mile and 24-hour courses.

Ford kept the Mach 1 alive into 1970 and little changed other than the visuals. The 1970 body included dual-beam headlights with the previous inner headlights becoming sport lamps and recessed taillights on a black honeycomb rear panel, side scoops behind both doors removed, revised bucket seats, deep dish sports wheel covers, as well as new side and rear badging and striping were the main visual differences. 1970 saw the previous 351W V8 engine options replaced with a new 351 cu in (5.8 L) Cleveland (351C) V8 in either 2V (2-venturi carburetor) or 4V (4-venturi carburetor) versions. The 351C 4V (M code) engine featured 11.0:1 compression and produced 300 bhp (224 kW; 304 PS) at 5400 rpm. This new performance engine incorporated elements learned from the Ford 385 series engine and the Boss 302, particularly the poly-angle combustion chambers with canted valves and the thin-wall casting technology. 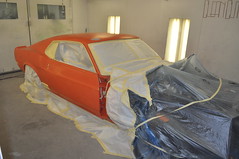 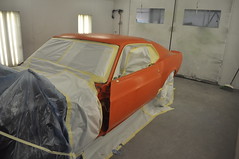 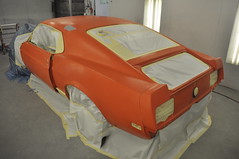 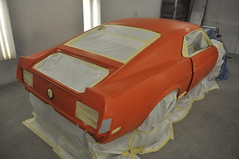 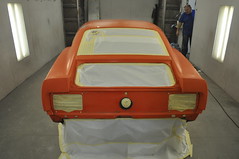 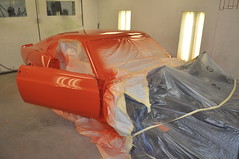 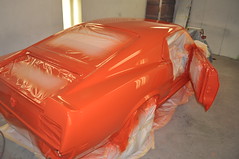 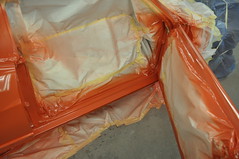 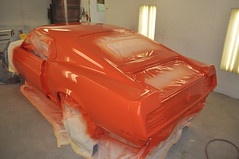 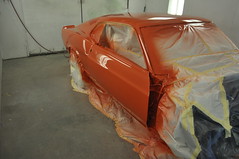 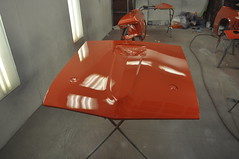 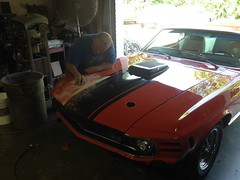 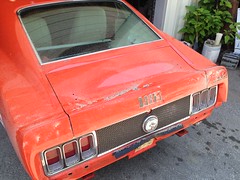 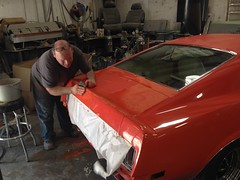 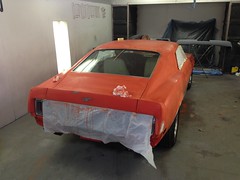 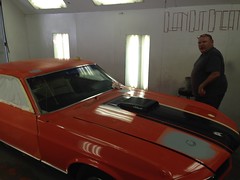 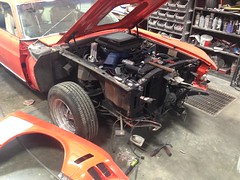 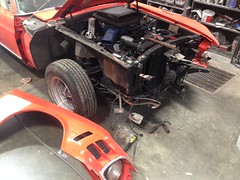 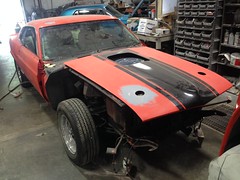 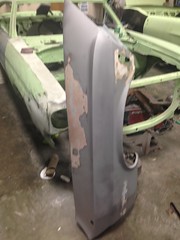