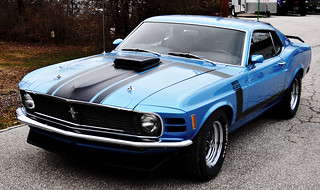 This 1970 Boss Mustang was brought in for a light exterior restoration. This one was not in too bad a condition, it was an older restoration that was starting to show its age. We performed some light body work and refinished the car in the original Acapulco Blue and reinstalled the Boss Stripes. We also installed a new flue tank and flue lines. This one turned out great and will make a great addition to any collection.

The Boss 302 Mustang is a high-performance variant of the Ford Mustang originally produced by Ford in 1969 and 1970, alongside its more powerful sibling the Boss 429 Mustang. Ford revived the model for another two year production run in 2012 and 2013. It was produced for the Trans Am racing series.

The Camaro/Mustang rivalry had begun in 1967 with the introduction of the Chevrolet Camaro by General Motors. The Camaro was the largest threat to the lead Ford had in the “pony car” field, a market segment largely created by Ford with the introduction of the Mustang in mid-year 1964. The performance of the Mustang with 289 and 390 engines was not up to the Camaro, with its small block and big block V8. In an effort to improve the Mustang’s image Ford made a 428 Cobra Jet V8 and a Ford Boss 302 engine optional for the 1968 mid-year and 1969 models, respectively. The Boss 302 C.I.D. (Hi-Po), engine was a created by combining a Ford Windsor, (Assembly Plant), 302 cubic inch engine block with “large valve” Ford Cleveland, (Assembly Plant), 351 cubic inch engine cylinder heads.[1] This optional engine, and indeed the entire vehicle package, including handling and aerodynamic aids, was made available for the express purpose of meeting the homologation guidelines to compete in the SCCA Trans-Am series, which limited engine displacement to 302 C.I.D., (5.0L), in order to compete.[2] The Boss 429 Mustang was born in a similar way, except with the intent of homologating Ford’s new “semi-HEMI” 429 C.I.D. engine (to race in NASCAR, instead of Trans Am. The much larger engine in the Boss 429 reflects the less restrictive engine displacement limits of NASCAR at the time.

The Boss 302 Mustang was designed by Larry Shinoda, a former GM employee. The car featured a reflective “c-stripe”. The fake air scoops in the rear quarter panel fenders of the regular production 1969 Mustangs were eliminated on the Boss 302, (only), models. A black horizontal rear window shade and a blackout hood were both options. It was one of the first production models with a front spoiler and rear deck wing. The name “Boss” came about when Shinoda was asked what project he was working on, he answered “the boss’s car” because the project was a secret. Also Shinoda had called it the “Boss” as an homage to the new President of Ford Semon “Bunkie” Knudson who had brought Shinoda over from GM’s Chevrolet Division after Knudson had left.

Changes for the 1970 model year included side “hockey stick” stripes which started along the top of the hood, along with the 1970 grille which replaced the 4 headlights with two vents in the outside position while retaining dual headlights within the grille opening. The dual exhaust system was redesigned, along with the competition suspension and a standard Hurst shifter. The intake valves were slightly smaller, and cast aluminum valve covers replaced the chrome. With a suggested price of $3,720, a total of 7,013 were sold.

Standard were disc brakes on the front, larger sway bars,a lower ride height, heavier duty spindles, reinforced shock towers, a four speed manual transmission, and the solid-lifter Boss 302 V8 engine with its free-breathing Cleveland style heads, which had valves larger than most motors over a third larger in displacement.[1] This “G Code” engine was rated at 290 hp (216 kW), however modern day tests show the engine may have been largely underrated, with dynos showing in excess of 380 horsepower in some cases.[citation needed]

Although Ford’s Drag Pack option with a special oil cooler was never formally offered on the Boss 302, it was often included with the 4.30:1 rear axle ratio. This coveted option is recognizable when the hood is opened to reveal Ford’s vertically mounted oil cooler in front of the radiator. Ford also had an option for Boss 302’s and 429’s for deluxe interior rather than standard interior 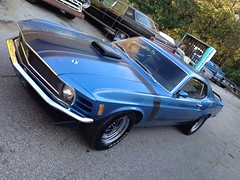 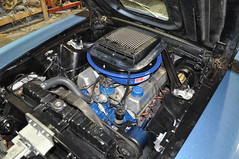 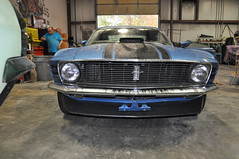 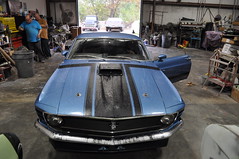 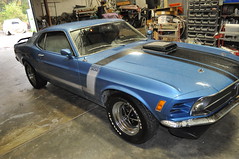 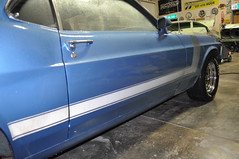 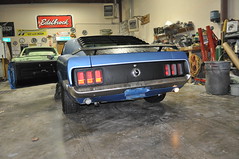 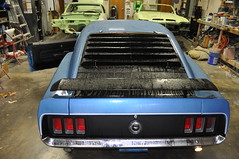 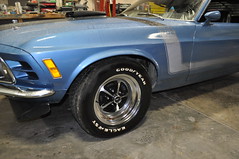 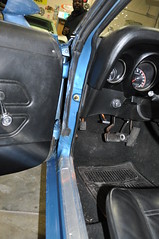 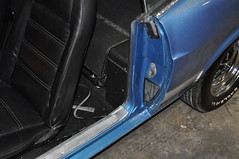 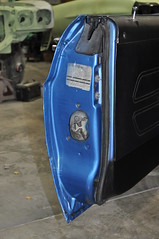 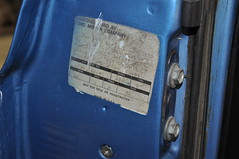 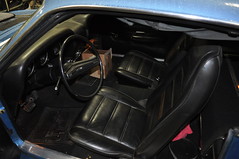 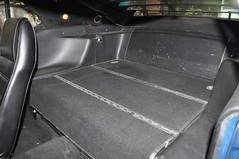 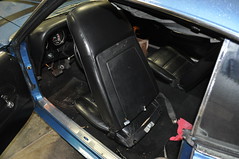 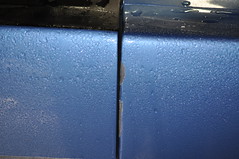 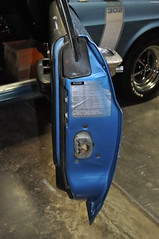 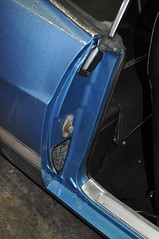 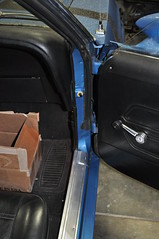