This 1969 Plymouth Road Runner came to us after it had been hit in an accident in a parking lot. It was the first time the owner had taken it out in almost 15 years.It was hit in the front left fender , while it was in to have those repairs completed the owner decided to have us fix a few other areas that he was un happy with. This Road Runner is a pretty cool car with some 70’s era custom touches, wheel flares and diamond tuck interior.All of the repairs turned out great! & the owner was very happy.

Paying $50,000 to Warner Bros.-Seven Arts to use the name and likeness of their Road Runner cartoon character (as well as a “beep, beep” horn, which Plymouth paid $10,000 to develop), and using the Chrysler B platform as a base (the same as the Belvedere), Plymouth set out to build a back-to-basics muscle car.

The 1969 model kept the same basic look but with some slight changes such as tail lights and grille, side marker lights, optional bucket seats, and new Road Runner decals. The Road Runner added a convertible option for 1969 with 2128 droptop models produced that year. All were 383 engine cars, except for ten 426ci Hemi convertible cars. Six of those Hemi convertibles were automatics and four were four-speed manual transmissions. Six are known to exist. No 440 6-bbl convertibles were made in 1969.

An Air Grabber option (N96 code) was introduced this year; it consisted of a fiberglass air duct assembly bolted to the underside of the hood that connected to twin rectangular upward-facing vents in the hood with orange vent screens. The fiberglass hood box had an “Air Grabber” sticker on the front. When the hood was closed, a rubber seal fit over the large-oval unsilenced air cleaner. A decal with Wile E. Coyote saying “Coyote Duster” was on the air cleaner lid. The assembly ducted air directly into the engine. The vents in the hood could be opened and closed via a lever under the dashboard labeled “Carb Air.”

In 1969 the 383ci engine was the standard powerplant, and the 426 cubic inch Hemi was the only engine option available for the Road Runner until mid year production. The standard 383ci V8 had 335 horsepower, and was marketed as the “383 Roadrunner” engine, which is also what the air cleaner read. The 383 Roadrunner had 5 more horsepower than the usual 383 Commando or Super Commando, thanks to a more radical cam. In addition to its higher horsepower rating, the 383 also had an astonishing 425 pound-feet of torque, which was the second-largest torque rating offered by Plymouth. However, if you were to order your Roadrunner with optional A/C, your standard 383 would be bumped down to the ordinary 330 horsepower. This is because the radical cam in the 335 didn’t create enough vacuum to accommodate a/c; and there were concerns of overrevving which would grenade the RV-2 York compressor.

The (A12) 440 cubic inch engine option with three Holley 2 barrel carburetors was added to the lineup at mid-year. Several of the cars were ran in Super Stock Eliminator drag race competitions. As denoted on its fiberglass hood, Dodge marketed its three two-barrel setup as the “440 Six Pack” for the 1969 Super Bee. 440 6-bbl Road Runners had no wheel covers or hubcaps, sporting only the 15×6″ “H” stamped steel black wheels with chrome lug nuts. It featured an organosol black fiberglass lift-off hood with 4 hood pins and a large functional hood scoop with a red sticker on each side saying “440 6BBL”. The scoop sealed to the large air breather. All cars had a Dana 60 rear axle with a 4.10 gear ratio. Production of the 440 6-bbl A12 option Road Runner was approximately 1432. The A12 option had an “M” as the fifth character in the VIN. The 440 engine was rated at 390 hp (291 kW) @ 4700 rpm, and 490 pound-feet of torque @ 3200 rpm, the same torque as the Hemi but at a lower engine speed. This meant the stock 440 6bbl was about as fast as the stock 426 Hemi in the 1/4 mile, with its lighter engine and hood. This option, along with the standard 383 and the Hemi made Plymouth and Dodge fierce competitors at the dragstrip. The Plymouth Road Runner was named Motor Trend “Car of the Year” for 1969. Sales topped 84,000 that year. 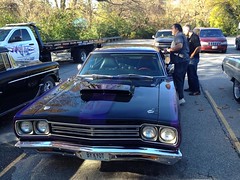 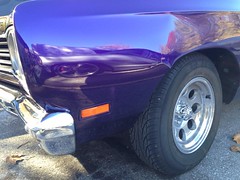 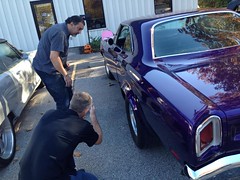 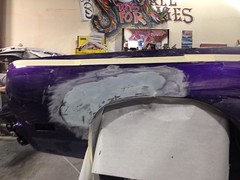 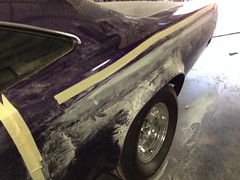 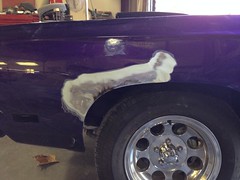 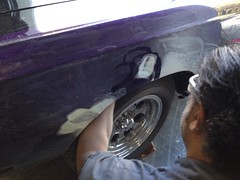 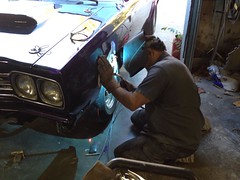 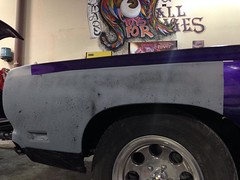 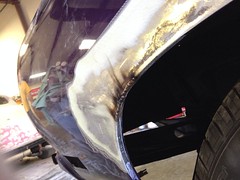 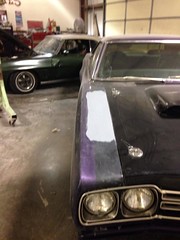 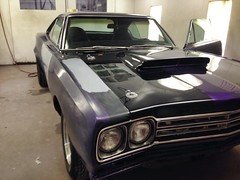 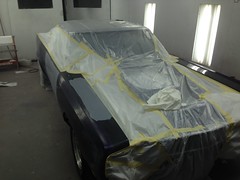 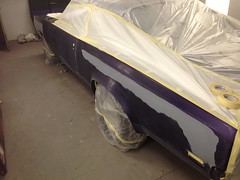 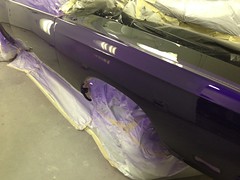 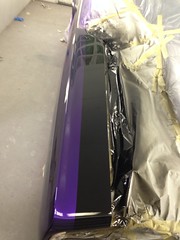 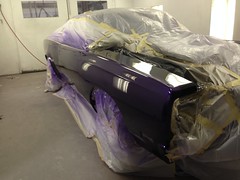 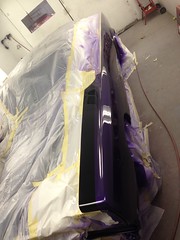