This 1957 Ford Thunderbird E Code 312 came in for some light body work and a complete exterior refinish. The owner brought the car to us already dissembled and would complete the reassembly himself.  This ’57 Thunderbird was in great shape needing very little body work but it had been painted many years ago, it was beginning to show its age and though it was white it was not the correct color white for the car. We work with a lot of enthusiast and collectors to maintain their vehicles. Many cars are well cared for and are not in need of a full restoration, we are very proud to help keep these classics on the road and looking great!

The Thunderbird was revised for 1957 with a reshaped front bumper, a larger grille and tailfins, and larger tail lamps. The 312 cu in (5.1 L) V8 became the Thunderbird’s standard engine, and now produced 245 horsepower (183 kW). Other, even more powerful versions of the 312 cu in (5.1 L) V8 were available including one with two four-barrel Holley carburetors and another with a Paxton supercharger delivering 300 horsepower (220 kW). Though Ford was pleased to see sales of the Thunderbird rise to a record-breaking 21,380 units for 1957, company executives felt the car could do even better, leading to a substantial redesign of the car for 1958.

Though inspired by, and positioned directly against, the Corvette, Ford billed the Thunderbird as a personal luxury car, putting a greater emphasis on the car’s comfort and convenience features rather than its inherent sportiness. Designations aside, the Thunderbird sold exceptionally well in its first year. In fact, the Thunderbird outsold the Corvette by more than 23-to-one for 1955 with 16,155 Thunderbirds sold against 700 Corvettes. With the Thunderbird considered a success, few changes were made to the car for 1956. The most notable change was moving the spare tire to a continental-style rear bumper in order to make more storage room in the trunk, and an optional porthole in the removable roof was offered and often selected by buyers. However, the addition of the weight at the rear caused steering issues. The spare was moved back to the trunk in 1957 when the trunk was restyled and made slightly larger. Among the few other changes were new paint colors, the addition of circular porthole windows as standard in the fiberglass roof to improve rearward visibility, and a 312 cu in (5.1 L) Y-block V8 making 215 horsepower (160 kW) when mated to a 3-speed manual transmission or 225 horsepower (168 kW) when mated to a Ford-O-Matic 2-speed automatic transmission; this transmission featured a “low gear”, which was accessible only via the gear selector. When in “Drive”, it was a 2-speed automatic transmission (similar to Chevrolet’s Powerglide).(Low gear could also be accessed with wide open throttle.) 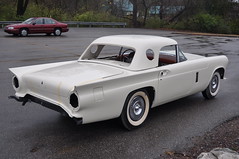 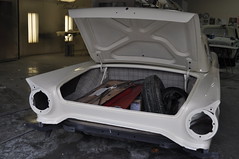 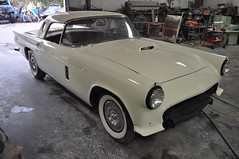 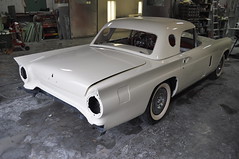 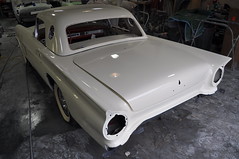 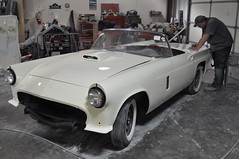 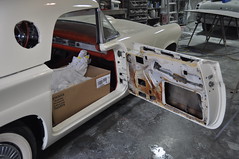 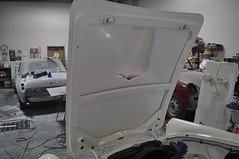 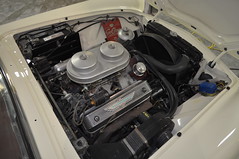 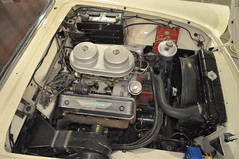 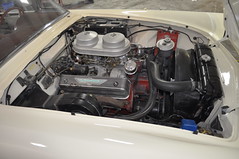 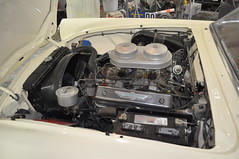 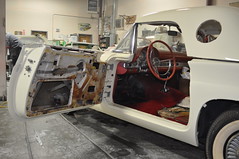 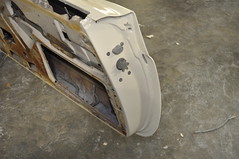 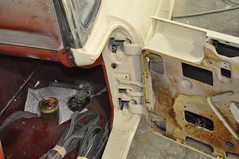 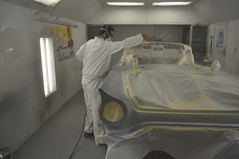 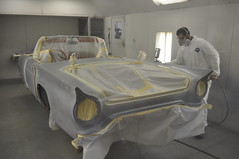 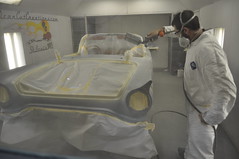 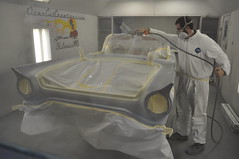 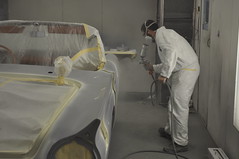 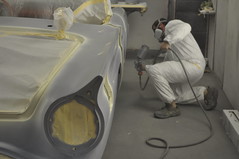 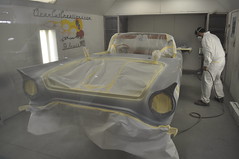 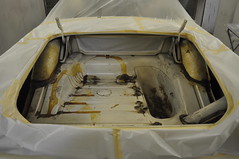 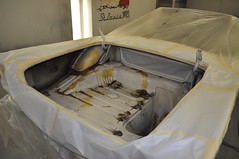