This 1954 Cadillac Eldorado was  already beautifully restored and was showing its age a bit, so we helped it out. We repaired and refinished the right 1/4, left door and catwalk. We then buffed and detailed the entire car.

In 1954, Eldorado lost its unique sheet metal, sharing its basic body shell with standard Cadillacs. Distinguished now mainly by trim pieces, this allowed GM to lower the price and see a substantial increase in sales. The Eldorados had golden identifying crests centered directly behind the air-slot fenderbreaks and wide fluted beauty panels to decorate the lower rear bodysides. These panels were made of extruded aluminum and also appeared on a unique one of a kind Eldorado coupe built for the Reynolds Aluminum Corporation. Also included in the production Eldorado convertible were monogram plates on the doors, wire wheels, and custom interior trimmings with the Cadillac crest embossed on the seat bolsters. 2150 Eldorados were sold, nearly four times as many as in 1953.

For 1955, the Eldorado’s body gained its own rear end styling with high, slender, pointed tailfins. These contrasted with the rather thick, bulbous fins which were common at the time and were an example of Eldorado once again pointing the way forward. The Eldorado sport convertible featured extras such as wide chrome body belt moldings and twin round taillights halfway up the fenders. Sales nearly doubled to 3,950. 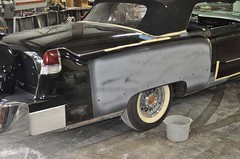 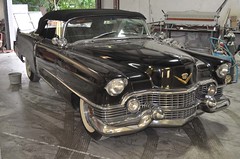 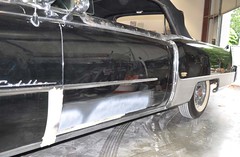 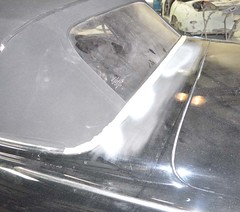 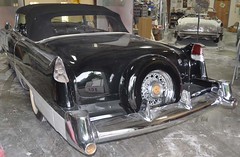 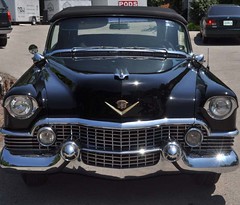