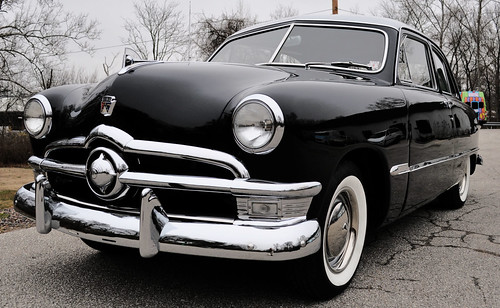 This 1950 Ford was brought to us already stripped and disassembled.We started by inventorying all of the parts. When it was taken apart nothing was ladled and just put in cups and baggies.When the car was stripped it was left to sit for 8 weeks, we had to sand off all of the surface rust that had accumulated & we quickly got it in epoxy primer to stop any further rusting.There was some light rust repair and body work to be done. we painted the dash and interior trim & wheels. Installed a new wiring harness & N.O.S turn signal with 4 way flashers. The interior was completed by a friend of the owner.  The owner wanted a 2 tone paint, the roof is painted silver with the body black. Our client lives in Mississippi and followed along with his build through our Face Book page and was able to see his car being built. He didn’t have to guess or worry about the progress of his vehicle.

The ‘49-’51 Ford was an American automobile produced by Ford. It was the first all-new automobile design introduced by the Big Three after World War II, civilian production having been suspended during the war, and the 1946-1948 models from Ford, GM, and Chrysler being updates of their pre-war models. Popularly called the “Shoebox Ford” for its slab-sided, “ponton” design, the 1949 Ford is credited both with saving Ford and ushering in modern streamlined car design with changes such as integrated fenders and more . The design would continue through the 1951 model year.

After sticking with its well-received previous model through model year 1948, Ford completely redesigned its namesake car for the year 1949. Save for its drive-train, this was an all-new car in every way, with a modern ladder frame now supporting a coil spring suspension in front and longitudinal semi-elliptical springs in back. The engine was moved forward to make more room in the passenger compartment and the antiquated “torque tube” was replaced by a modern drive shaft. Ford’s popular 226 CID (3.7 L) L-head straight-6 and 239 CID (3.9 L) Flathead V8 remained, now rated at 90 hp (67 kW) and 100 hp (75 kW), respectively.

The 1949 models debuted at a gala at the Waldorf-Astoria Hotel in New York City in June 1948, with a carousel of the new Fords complemented by a revolving demonstration of the new chassis. The new integrated steel structure was advertised as a “lifeguard body”, and even the woody wagon was steel at heart. The convertible frame had an “X member” for structural rigidity.

From a customer’s perspective, the old Custom, De Luxe, and Super De Luxe lines were replaced by new Standard and Custom trims and the cars gained a modern look with completely integrated rear fenders and just a hint of a fender in front. The new styling approach was also evident in the 1949 Mercury Eight and the all-new Lincoln Cosmopolitan.

1950 saw a new Crestliner “sports sedan”—a 2-door sedan with 2-tone paint intended to battle Chevrolet‘s popular hardtop coupe of 1950.Another new name was Country Squire, which referred to the 2-door wood-sided station wagon. All wagons received flat-folding middle seats at mid-year, an innovation that would reappear in the minivans of the 1990s. The 1949 and 1950 styling was similar, with a single central “bullet” in the frowning chrome grille. In the center there was a red space that had either a 6 or 8 depending if the car had the six-cylinder engine or the V8. The trim lines were renamed as well, with “Standard” becoming “Deluxe” and “Custom” renamed “Custom Deluxe”. The new Fords got the now-famous “Ford Crest” which appeared on the division’s vehicles for many decades in one form or another. In 1950, Ford also manufactured a lesser known Business Coupe.

he 1951 Fords featured an optional Ford-O-Matic automatic transmission for the first time. Ford finally answered the Chevrolet Bel Air charge with the Victoria hardtop in 1951. The car was an instant hit, outselling the Chevrolet by nearly 10%. The Crestliner continued for one more year, however. All 1951 Fords sported a new “dual-bullet” grille and heavy chrome bumpers. This year Ford also added a new “turn-key” ignition.Front suspension is independent coil springs. Head room was 36.1 inches. 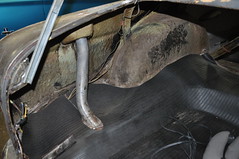 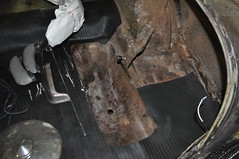 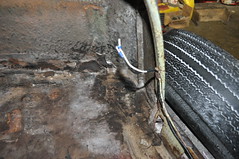 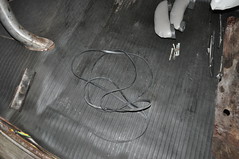 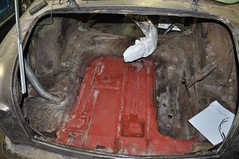 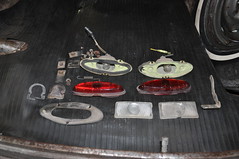 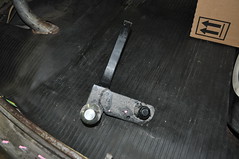 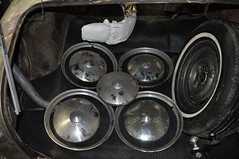 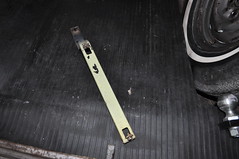 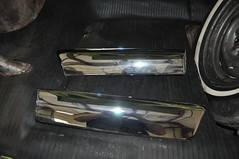 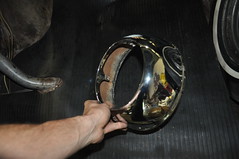 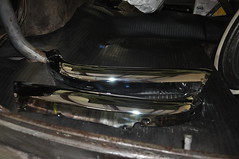 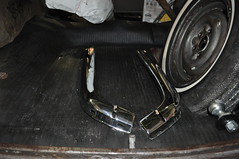 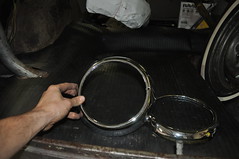 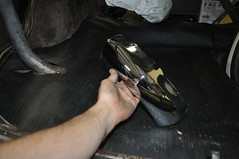 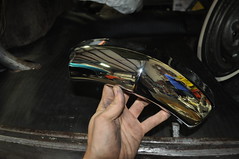 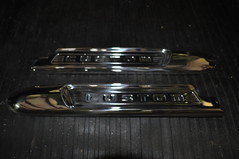 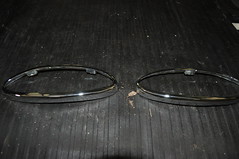 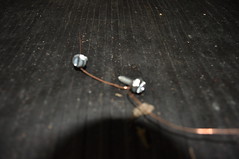 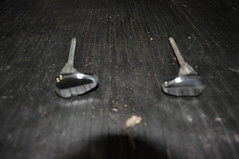