Sport Truck S-10 Chop Top, The name of this article was “A Little Off The Top”. In this is a tech article from the October 2007 issue of Sport Truck Magazine we show step by step how to chop the top on a Chevy S-10. One of the goals of this tech was to chop the top without needing to cut any of the glass. We were able to do just that by carefully placing our cuts and limiting how much we took out. The cab in this article did not belong to anyone of our clients, we picked it up from a local salvage yard for cheap and when we finished this article it was eventuly scrapped. This was a fun project to tackle and this mod really makes for a dramatic change that’s sure to get a lot of attention.

For those who may not know.  Chopping the top” goes back to the early days of hot rodding and is an attempt to reduce the frontal profile of a car and increase its speed potential. To chop a roof, the pillars and windows are cut down, lowering the overall roofline. Some racers on the dry lakes chopped the tops of their cars so severely the windows were only a few inches tall. These were sometimes referred to as “mail slot” windows. This sort of bodywork is also popular on custom cars, kustoms, and leadsleds. Roof chopping also quickly became very popular with drag racers for much the same reasons as it did for lakes racers. The first roof chopper is considered to be Sam Barris (brother of auto customizer George Barris), who chopped and customized his brand new 1949 Mercury. Barris also pioneered a more advanced form, where the B-pillar is removed, turning it into a pillarless hardtop in the process.

Concept cars, such as the AMX-GT, often undergo a lowering of their roofs, even if the vehicles are based on production models. Automakers use the chopping technique to make their show cars look more sleek and “racy”, although it would be impractical for normal use 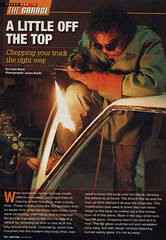 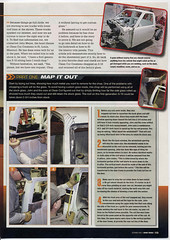 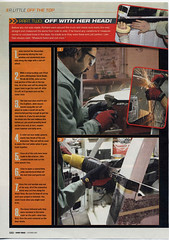 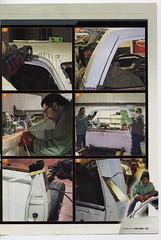 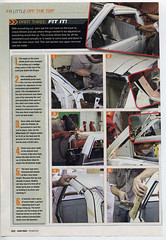 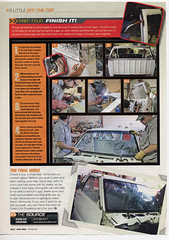